Kids, Camp and the Moon 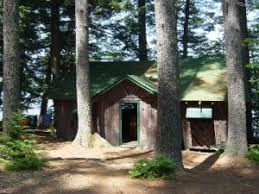 In July of 1969, I was at summer camp in Maine. It was an all-girls "sleep-away" camp and the season was a full eight weeks.

I loved, loved, loved camp. It was a world away and to me it felt  like a world unto itself. We lived in wooden cabins with no electricity. We used outhouses, and bathed and shampooed in the lake. (This was before people realized that the suds from Breck and Prell shampoos weren't great for the water.) We all wore the same green shorts and white shirts, and we all swam in the freezing cold lake, climbed local mountains, and paddled canoes to go on camping trips.

We girls navigated at night with flashlights, mindful of the tree roots buried in pine needles. Our favorite past time was playing jacks. I wrote home on pieces of birch bark, even though my mom had equipped me with stationery.

One night, after taps had been played and we were all asleep in our cabins, our counselor woke us up. We were all to go to the campfire area. Sleepy and confused, we stumbled our way in the cool, dark Maine night. The whole camp had gathered.

Incredibly, we found a small black and white television set perched on a tree trunk. Multiple extension cords led from the back of the set into the dining area, the only camp building with electricity. 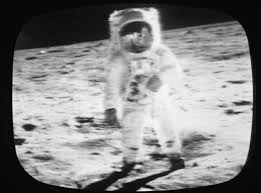 We'd been brought to watch a man walk on the moon.

We strained at the grainy image.  You could barely make out what was on the screen, a fuzzy grey figure moving in almost slow motion. One of the counselors kept adjusting the antenna.

I don't know what was more shocking - a television at camp - or a man walking on the moon.

Afterwards, we all headed back to our cabins. The batteries in my flashlight were weak - shedding only the palest light ahead.  I stopped and pointed my flashlight up at the moon, as if that could make what I'd witnessed more comprehensible.

I know that kids at camp now own cell phones with more computing power than Apollo 11 had that day. Yet I feel lucky beyond words that I got to be a child back then.

I was also at camp then — in Minnesota. The owners gathered everyone to sit on the ground outside their house, where they had their TV in a window, facing outwards. It was one of those moments that, like you, is etched in my brain forever!